On the Quest for a Digital Renaissance

Experts hate being proven right about avoidable disasters - after the fact

We live yet again in an age of unreason - where cross-competence complexity is so big that special interests groups (in both private sector and public bureaucracy) easily manipulate decision making. As an expert in the field of #Trustworthy Computing, it is heartbreaking to witness how bad decision-making in the institutional systems again and again despite sustainable alternatives lead to - predictable and predicted - damaging action that undermine both democracy and markets.

Being proven right - after the fact - in a predictable and predicted failure where the authorities involved ignored warnings and suggestions on how to avoid and solve the problem.

Why? Because it is still a failure but now it is my problem and now the institutional system was proven untrustworthy.

One such example is #Covid19 infection mitigation and investigation and the so-called "proximity app" and health passports.

We analyzed this early and made very specific suggestions already late March on how to deal with it - at least the most sensitive applications in hospitals, care centers and e.g. airports. 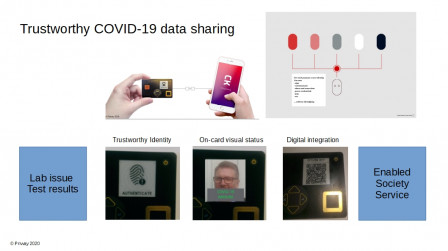 What do we need?*

Each of the above represent serious technical challenges - but each of these represent areas where we know Trustworthy Anonymous solutions if we apply best of breed technologies and architectural design !

But what do we see? Google & Apple got to use their platform power dictate a dysfunctional surveillance model where they have key control and can both track citizens and prevent solutions.

Google & Apple marketing focus heavily on the fact that many nations states initially instituted draconian surveillance schemes based in intimate surveillance. And it is true that their cartel model makes it harder for governments to engage in location and social proximity surveillance. But since mobile phones are heavily tracked through the GSM system, since Google & Apple engage heavily in location tracking as part of e.g. target marketing/positioning services and since any bluetooth pairing communication leak identifiers, the claim that this is "privacy enabled" is simply not true.

Worse. Nation states now engage in social blackmail to do intimate surveillance and profiling of citizens collecting health data and even DNA as a requirement of traveling and living. The back-end and healthcare structures are simply not designed according to trustworthy principles and now sensitive health data become part of basic day-to-day operations.

Nation states all over the world failed to focus on the problem. Even the best and most attentive democratices only addressed subsets of the problem. The amount of money that have been wasted on the mislead agenda is incredible while the real problems have only been growing and we are nowhere nearer real sustainable solutions.

Why? Habitual thinking, interests trumping rights and needs, complexity scare - you tell me?

What is clear - despite knowing better, we did not prepare for the second wave or new epidemics when we had the time and had constructive suggestions - the institutional systems demonstrated an alarming incompetence and neglect to respect even the most fundamental of sustainable principles and basic value of democracy and markets.

Experts hate being proven right above about avoidable failures - after the fact.